27 months. Unimaginable project and cost delays. One unusable automation system. That was what Stafford-based fabrication company Mec-Com was faced with following one simple mistake. Choosing the wrong automation partner.

From almost admitting defeat and deciding against automation, after working closely with Bauromat to rectify all issues from a previous project, Mec-Com is now the latest company to introduce a fully automated robotic welding system to their manufacturing process and since, have become a huge flag bearer for the use of robotics within manufacturing.

Mec-Com’s need for an automation system, like many other manufacturers, comes as a result of increased workload and wanting to meet rising demand.

“Our clients approached us about expanding our welding portfolio and we had had discussions about needing to upgrade to the robotic side of our processes”, says Mec-Com Managing Director Richard Bunce.

“We were new to the field of automation; we went through our normal procedure [to select a supplier] but we were not experienced enough to do a proper initial assessment, that’s the truth.” 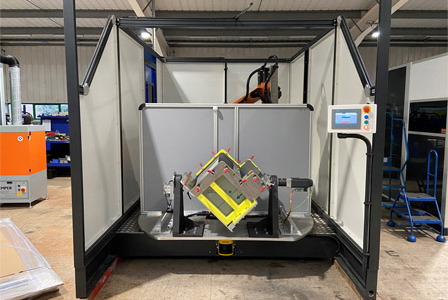 Little did they know at the time, but Mec-Com’s decision to push on with this particular integrator would be the start of over 18 months of misguidance, empty promises, and needless stress. All resulting in an automation system that was not only unfit for purpose, but entirely unusable, nothing more than a white elephant.

“We are thinking integration is integration we go to them and they promised big. We go into this degree of automation and we are trusting the so-called experts, but the truth is they were not trust-worthy, and they were not experts” Richard states.

Therein lies the problem faced by many manufacturers looking for a first step into automation. It can be an incredibly daunting step full of jargon and new technologies, so how do you know exactly what to expect and how can you separate those true expert integrators with those that just claim to be?

“Go and speak to people and seek fair, unbiased advice. Do the research. Do the due diligence, make sure the integrator has experience in the field you are trying to integrate.

“Research them as a company and see and speak to their customers. That’s what we didn’t do. We didn’t do the due diligence correctly and that led us a lot of pain”

"The Concept Wasn't Wrong, We Just Picked a Bad Partner"

With the best part of two years passed and the original system no closer to welding than it had been prior to the project launch, Richard and the team at Mec-Com had to seriously consider the next steps? Do they continue with the current integrator and wait until the problem is, if at all, resolved, do they scrap the project altogether, or do they look elsewhere?

Following frank but constructive conversations with his client, and with the project still needing to go ahead, the difficult decision was made to continue with the project and bring a new integrator onboard – Welding experts, Bauromat UK Limited.

“I was delighted by the degree of support and encouragement from our end client. His support gave us the lease of life to roll the dice again, but it wasn’t easy [deciding to continue with the project after being badly let down]

The next thing that gave us the confidence was meeting the Bauromat team.”

With over 20 years of automation experience, generally focussing on the field of welding, Bauromat produced a report breaking down the issues with the current system, as well as proposing a system that would ensure what Mec-Com needed would be achieved.

But the report was worse than Richard had initially considered.

“I wanted [Bauromat to] tell me that ‘it’s virtually done, it’s gonna be a few hours, a few weeks, but fundamentally, we can take that product with our experience and turn it into a functioning system.’

“Unfortunately, what I was told was that it doesn’t work, it’s not just incomplete, but an unsafe system, and it’s extremely unlikely to ever function.

“I just felt sad and disappointed. Despondent. The first attempt [at automation] had been disastrous.

“Listening to the honest appraisal of the challenge ahead, one thing for certain, nobody said ‘it’s a walk in the park, it’ll cost nothing and be done in 5minutes’ nobody said that.

“No overpricing, no over-speccing, Bauromat were drawing on your experience. Realistic time scales, realistic prices backed up with examples on the shop floor. Painting an image in my mind how we move from where we are to where we need to be, without being jargonised.” 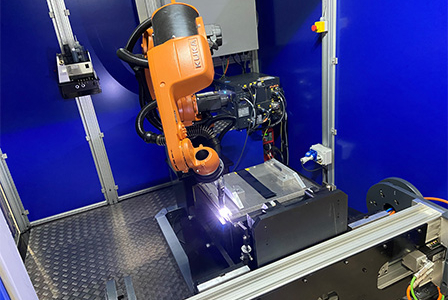 The process links to Bauromat’s philosophy of integration from day 1. In other words, from the first handshake to the installation of the project on-site, Bauromat ensures the end-user understands the process, knows the timeline, and has input and confidence at all stages This allows a fantastic rapport to be built between supplier and user, making the final product the best it can possibly be.

The result, which you can find the specs of over here [link to the article previously published] was signed off late in 2020 and is primed in Mec-Com’s Staffordshire factory, ready for full production to begin early this year. From initial discussions to installation and production, it took just 9 months of a 27-month long process taking Mec-Com and Richard Bunce from automation doubters to believers.

“We’re delighted we’ve found a partner that can walk us through future projects and integration. The next thing we need to automate, we’ll speak to Bauromat.”

“We now have a solution and robotics is a field we can get involved in. The concept wasn’t wrong, we just picked a bad partner.”

The result is simple. Pick the wrong automation partner or system integrator and lose a dozen finals every day; pick the right one and you’re top of the world.

“My team were battered, scarred, and disillusioned. Now they cannot wait for the next project and can’t wait to get involved with Bauromat again.”